All Collections
Campaigns
Advanced Campaigns
How to add Manual Task to the campaign?

How to add Manual Task to the campaign?

Manual Tasks allow you to add certain actions to your campaign to improve your workflow and your prospects management in Woodpecker.

How it works
How to set it up
FAQ

You can add Manual Task to your campaign workflow to remind yourself about tasks related to your prospects to do outside of Woodpecker. This can be a reminder to make a phone call, send a connection invite on the social media platform, or simply check on their status in-app. 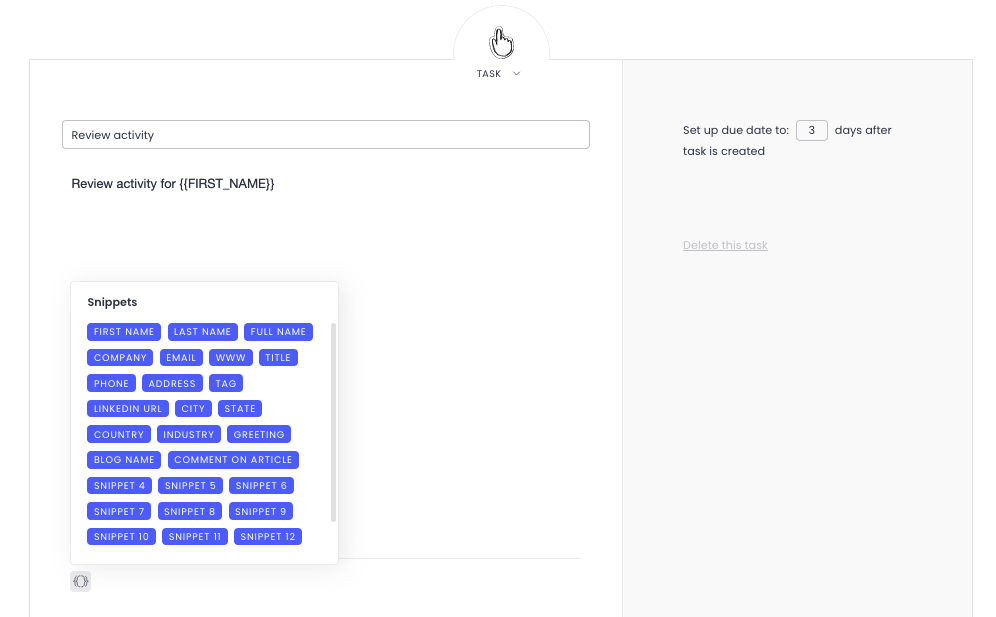 Manual Tasks will impact your campaign flow, as prospects whose tasks remain unresolved will be stopped from progressing further in the campaign sequence. What happens if my task is overdue? »

Once you create a task in your campaign flow, it will appear in the ‘Task’ tab only after your prospect reaches a certain step in the whole sequence. For example, if your task is set after the first follow-up you’ll see it when your prospects will receive a second email from you.

How to set it up

While creating or editing your campaign, simply click on an icon to add another step to it and choose between an email and a task. If you decide to choose a task, you’ll be given an option to name your task and write a short description of the action that needs to be done.

On the right panel, you’ll be given an option to choose how much time you give yourself to do this task or to delete this task.

If this task is the opening step for your campaign you’ll be also able to set several prospects for which this task can be created daily.

You cannot delete a task that was created for even one prospect. You can only do so before your prospect reaches a step with it.

If you see a Requires attention message underneath the campaign name in your Woodpecker account this means some tasks need to be done as the campaign reaches them. 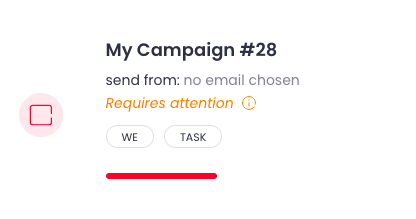 Simply go to your campaign view to take care of them in the ‘Tasks’ tab.

In this tab, you’ll see all the tasks you’ve set as soon as prospects will reach a certain campaign step. If there are currently no tasks that need to be completed you’ll see information about the coffee break as there is nothing for you to do today.

Marking a task as done

If you want to mark your task as done, simply click on the circle with a checkmark next to its name. You’ll see it change to a green color, which means that it will be marked as done and your prospect will move forward in the campaign sequence.

You can also skip your task by clicking on the arrow on the right, next to your prospect details, and clicking ‘Ignore’ next to the red cross.

By marking your tasks as done or ignored you allow your prospects to move forward in the sending sequence. However, if your task remains unresolved, as long as you don't mark it, your prospect will be stuck in the campaign flow at this step.

At the bottom of your campaign page, you’ll now also see statistics about your task in the campaign flow. You can see how many of them are ‘Created’, ‘Done’, ‘To Do’, ‘Ignored’, and ‘Overdue’.

Q.: What happens to the task if my prospect responds?

If your prospect replies during the time period when you need to do your task, they will be assigned the status ‘Responded’ which, even if you mark your task as ‘done’ or ‘ignored’, will stop them from moving further into the campaign flow.

They will not receive the next scheduled emails and the next tasks won’t show up in the ‘Tasks’ tab for them. The same goes for every other status than ‘Active’.

Q.: Do I need to connect an email account to have a campaign made only with Manual Tasks?

No, if you’re not going to send an email via this campaign, you do not need to connect an email address to it to get it up and running.

Unfortunately, no. If you mark your task as ‘done’ it cannot be undone as your prospect has already been queued for the next step in the campaign.